Tibet — the mystical roof of the world, peopled with enlightened monks? Only one of them wouldn’t toe the line: Gendun Choephel, the errant monk who left the monastic life in 1934 in search of a new challenge. 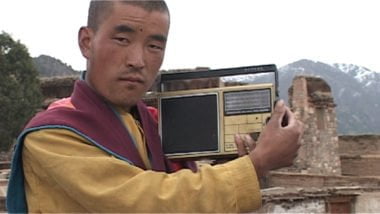 As a free spirit and multifaceted individual, he was far ahead of his time and has since become a seminal figure, a symbol of hope for a free Tibet. A rebel and voluble critic of the establishment, Gendun Choephel kindled the anger of the Tibetan authorities.

The cinematic journey through time portrays the life of this unorthodox monk, revealing a face of old Tibet that goes against popular clichés. The film makes an abundance of unique and rare historical footage available to the general public for the first time.

But it does not dwell on the past; rather it skilfully oscillates between tradition and modernity. Archival images of ancient caravans and monasteries give way to scenes of discos and multi-lane highways in Lhasa, where pilgrims pros- trate themselves as they circle the holy temple. ANGRY MONK offers a fascinating insight into a country whose eventful past is refracted in the multiplicity and contradictions of everyday life.

Ultimately, the documentary «Angry Monk» also tells the story of a man who left home to search for something that could have liberated traditional Tibet from its rigidity. An outsider who was always open to new things, he eventually became a stranger in his homeland and homeless in foreign lands — a wanderer between worlds.

(The documentary «Angry Monk» was also the main part of my Ph.D. in Visual Anthropology at the University of Zurich)